The founding group of people interested in Sligo Creek met in January 2001, sparked by the “gleam in the eye” of a long-term Anacostia Restoration plan, which foresaw the potential effectiveness of very local, citizen-based watershed groups. Metropolitan Council of Governments staffer John Galli recruited long-time Sligo resident Sally Gagne to get the ball rolling. She placed a meeting notice in the Gazette weekly newspaper. More than 30 people showed up at the meeting, held at the Long Branch Community Center.

That first year, an excited, determined group of people from Silver Spring and Takoma Park worked together to craft bylaws and constitute a Board of Directors, and they established a decade-long pattern of regular program meetings, outdoor work days, and local advocacy within county civic processes. In 2002, Friends of Sligo Creek was incorporated as a non-for-profit organization in the State of Maryland.

Before that 2001 meeting, John Galli of the Metropolitan Washington Council of Governments had engineered the three holding ponds on Dennis Avenue by 1994 and directed restoration of the banks of the Wheaton Branch, which runs from the ponds to Sligo Creek. In the midst of this work, John led two efforts at forming a “friends” group, neither of which endured.

When Sally attended a 2000 meeting organized by John, she had already begun her own efforts to support Sligo Creek. She had sent a letter to several Civic Associations bordering Sligo Creek and Wheaton Regional Parks to convey her concerns about invasive plants growing in the Sligo Creek Watershed and determine if others held the same concerns. She had also requested a review of invasive plants in the park from Carole Bergmann of M-NCPPC, a Forest Ecologist who was then starting the Weed Warrior program.

Following the 2000 meeting, Sally committed to trying to form a Parks support group, and the Friends of Sligo Creek that has survived to this day is an outgrowth of her efforts. At that first official FOSC meeting on January 18, 2001 at Long Branch Community Center, the group formed an Interim Steering Committee and by year’s end, FOSC had attracted 100 or so members and had held eight indoor and four outdoor events and programs. By 2002, Friends had a fully functioning Board, became registered as a non-profit organization, and held its first annual Sweep the Creek – which has been one of our hallmark events ever since. 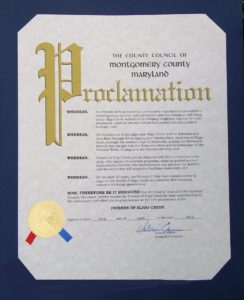 In August 2011, Friends of Sligo Creek celebrated its 10-year Anniversary as a community organization dedicated to restoring the health – the water quality, natural habitat, and ecological well-being – of the Sligo Creek Watershed. It was recognized by Montgomery County government for its efforts and for the anniversary.

Since firmly establishing itself twenty years ago, Friends of Sligo Creek has continued to develop as an organization by putting in place: website, member database, regular electronic newsletter, strategic plan, active advocacy efforts, and several working committees – all of which you routinely read about in our newsletters and on the website. We continue our public educational programs and walks, as well as update the dozen or so kiosks we established along the Sligo trails to showcase seasonal and Sligo-specific natural resources. In the course of this growth, FOSC received several awards for its efforts and now has about 600 members.

Despite the small size of the creek and park, our organization has an outsized reputation in Montgomery County and in Maryland because of the activism and remarkable commitment of our members. We take seriously our role as stewards of Sligo Creek and park, part of the growing network of activists and naturalists who understand, improve and appreciate our parks and watersheds as a legacy for all.

The Very Beginnings of FOSC by Sally Gagné