Friends of Sligo Creek actively advocates for the Creek. The core requirement is that the topic or concern affect the Sligo watershed.

The Advocacy Committee advocates to reduce stormwater runoff and erosion, remove invasive plant species, improve water quality, preserve and expand natural habitats, and reduce plastic and trash that ends up in our waterways.

Our involvement in our watershed often includes supporting greater open public spaces in densely populated areas, effective stormwater management, more tree planting, and sometimes opposition to development of forested spaces. We have a fairly hard and fast rule that we only weigh in on issues that directly impact our stream, park and/or watershed. This means we can opine on climate change but didn’t, for example, oppose or seek modification of the Cross County Connector as it affected a separate set of watersheds.

The Committee tailors its advocacy approach depending on the nature of the issue. Often, we will sign on to a letter, joining several or dozens of other groups. In more selected instances, we’ll engage in a longer and more direct and intensive process that could involve multiple letters, meetings, and potentially years-long involvement. If there’s a question or a new major issue, we’ll make sure the FOSC board votes on whether to take it on.

The Advocacy Committee’s involvement in two complex issues, the Purple Line and Beltway Expansion, illustrate how FOSC advocacy varies depending on the issue. Both projects cut or will cut across our watershed. But the way we’ve engaged decision-makers on these issues has been different:

An Example: the Purple Line

In general we support mass transit to limit pollutants and facilitate pedestrian, bicycle and other non-motorized uses. FOSC supported the light rail Purple Line under this rubric, with caveats, at the same time urging much greater commitment to (re)planting of trees and use of stormwater projects along the project route, among other issues. Further, we serve on two Citizen Advisory groups on an ongoing basis. And we’ve worked with Montgomery Parks to push for stormwater projects related to the Purple Line. See Advocacy efforts FOSC has supported related to the Purple Line on the Purple Line page and on the Letters and Testimony page.

FOSC has expressed many concerns about the proposed expansion to add toll lanes on the Beltway. The proposals currently don’t include any significant mass transit measures and instead facilitate more auto traffic. We’ve written, testified, held informational meetings, and with a coalition, met with the Board of Public Works Treasurer (one of three members) to discuss these issues. See the latest on the Beltway Expansion page under the Current Issues tab. Advocacy letters related to the Beltway expansion may be viewed on the Letters and Testimony page.

Please join us in writing, calling and testifying on important issues for the health of the Creek and watershed residents. The Current Issues page has more information on the issues on which FOSC currently advocates. Larger issues are explored on pages devoted to those topics: Synthetic turf, Beltway expansion, and the Purple Line. The Letters and Testimony page has sample letters and testimony you may use to advocate individually on these issues.

If you are interested in advocating for Sligo Creek with FOSC, please contact Advocacy Committee chairperson Kit Gage at advocacy at fosc.org. 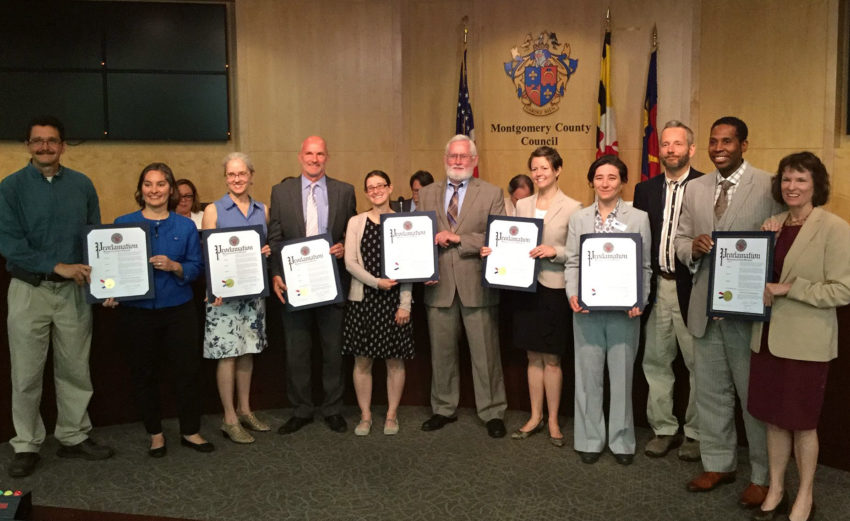 The County Council recognized FOSC’s accomplishments at a ceremony on Sept 26, 2019.