Water Quality – Basics and Beyond

Water Quality – Basics and Beyond

What is a watershed? What affects its water quality?

Through its Water Science School, the U.S. Geological Survey (USGS) offers this synopsis of watersheds, streams, and water quality:

“A watershed is an area of land 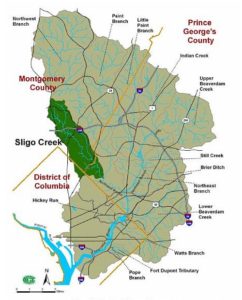 that drains all the streams and rainfall to a common outlet such as the outflow of a reservoir, mouth of a bay, or any point along a stream channel. Watersheds can be as small as a footprint or large enough to encompass all the land that drains water into rivers that drain into Chesapeake Bay, where it enters the Atlantic Ocean. This map shows one set of watershed boundaries in the continental United States; these are known as National hydrologic units (watersheds).

The word “watershed” is sometimes used interchangeably with drainage basin or catchment. Ridges and hills that separate two watersheds are called the drainage divide. The watershed consists of surface water–lakes, streams, reservoirs, and wetlands–and all the underlying groundwater. Larger watersheds contain many smaller watersheds. It all depends on the outflow point; all of the land that drains water to the outflow point is the watershed for that outflow location. Watersheds are important because the stream flow and the water quality of a river are affected by things, human-induced or not, happening in the land area “above” the river-outflow point.

Most of the precipitation that falls within the drainage area of a stream’s USGS monitoring site collects in the stream and eventually flows by the monitoring site. Many factors, some listed below, determine how much of the stream flow will flow by the monitoring site. Imagine that the whole basin is covered with a big (and strong) plastic sheet. Then if it rained one inch, all of that rain would fall on the plastic, run downslope into gulleys and small creeks and then drain into main stream. Ignoring evaporation and any other losses, and using a 1-square mile example watershed, then all of the approximately 17,378,560 gallons of water that fell as rainfall would eventually flow by the watershed-outflow point. 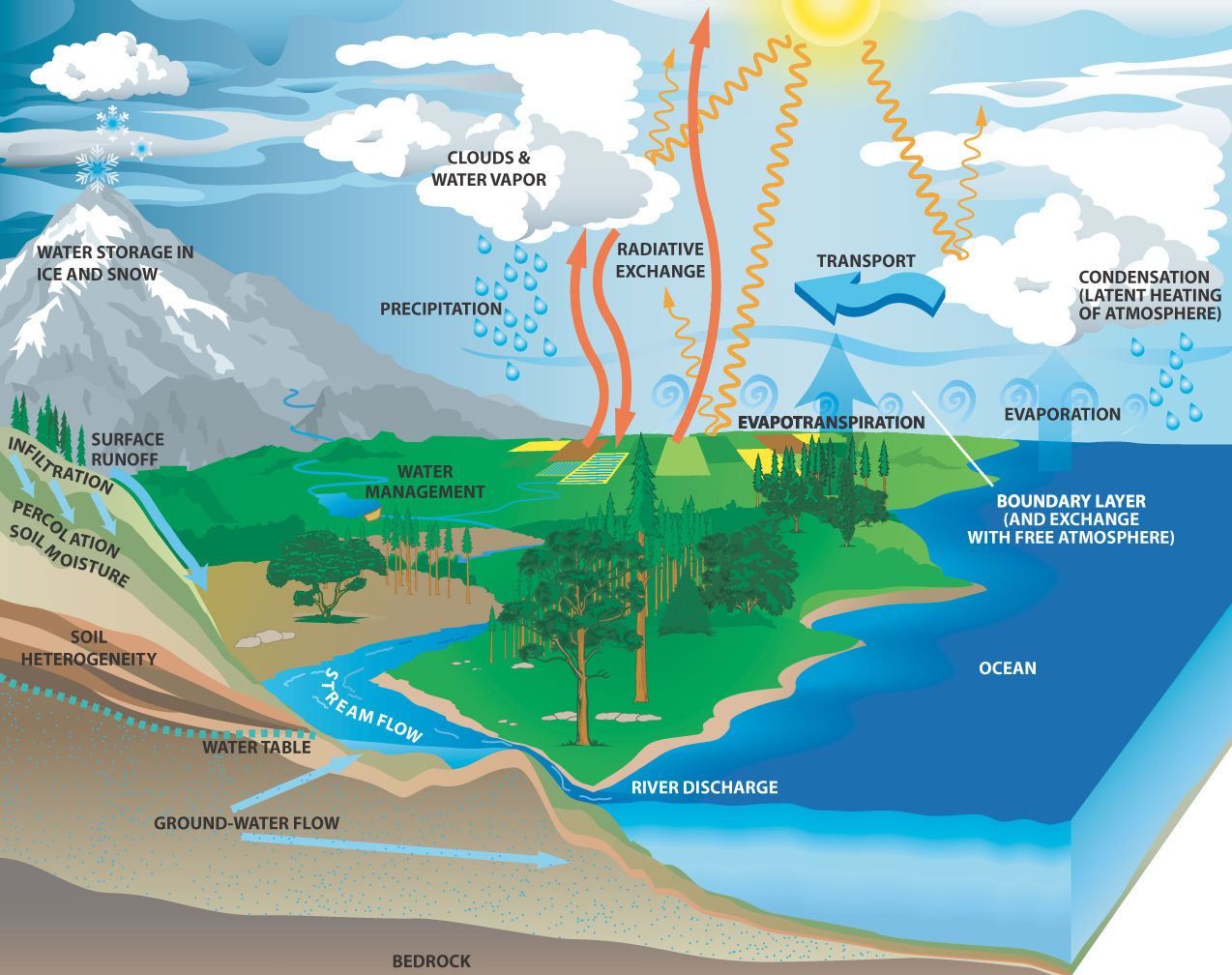 There are many factors that determine how much water flows in a stream (these factors are universal in nature and not particular to a single stream):

Infiltration: When rain falls on dry ground, some of the water soaks in, or infiltrates the soil. Some water that infiltrates will remain in the shallow soil layer, where it will gradually move downhill, through the soil, and eventually enters the stream by seepage into the stream bank. Some of the water may infiltrate much deeper, recharging groundwater aquifers. Water may travel long distances or remain in storage for long periods before returning to the surface. The amount of water that will soak in over time depends on several characteristics of the watershed:

Evaporation: Water from rainfall returns to the atmosphere largely through evaporation. The amount of evaporation depends on temperature, solar radiation, wind, atmospheric pressure, and other factors.

Transpiration/Evapotranspiration: The root systems of plants absorb water from the surrounding soil in various amounts. Most of this water moves through the plant and escapes into the atmosphere through the leaves. Transpiration is controlled by the same factors as evaporation, and by the characteristics and density of the vegetation. Vegetation slows runoff and allows water to seep into the ground.” (Text and links courtesy of the U.S.Geological Survey Water Science School)

“Streams can be home to countless species, some of which we’re familiar with, and some less so. The aquatic organisms in streams include fish, of course, but go far beyond that. Molluscs, like clams and mussels. Amphibians, like salamanders and frogs. The larvae of many insects, like dragonflies, damselflies, and mayflies. Algae and bacteria. Stream ecology encompasses the study of these aquatic organisms, but also the study of the riparian zone, sediment transport, the movement of energy and nutrients within the stream, and a host of other aspects of stream ecosystems.

Sligo Creek is a heavily urbanized stream that has seen gradually improving biological health scores since the 1990s. There are many local Maryland nonprofits, municipal, county, and state organizations working to further these gains: