The Very Beginnings of FOSC

The Very Beginnings of FOSC

In the 1980s a visiting British entomologist friend walking in Sligo remarked, “You have so many tree species compared to what grow along the Thames.” It sparked my awareness of tree diversity in our area.

By 2000 I could not but notice that quite a few invasive plants were growing in the Park in my neighborhood. I and some neighbors contacted M-NCPPC and learned there was a Forest Ecologist, Carole Bergmann, who worked for the Park. We asked if she would take a look at plants in Sligo. She did, and agreed the plants were a problem. In fact at about that time Carole was starting the Weed Warrior program.

Wondering if others were concerned about vines moving into the Park, I sent a letter (by post!) to civic associations bordering Sligo Creek Park and Wheaton Regional Park. An address list was conveniently kept at the time by M-NCPPC. I received one brief reply.

However, someone forwarded my letter to John Galli, who by 1994 had engineered the three holding ponds on Dennis and directed restoration of the banks of the Wheaton Branch (which runs from the ponds to Sligo). Shortly after his work, a Friends of Sligo Creek group started up. In time it ended and a second group with the same name appeared, but it too was impermanent. John held meetings for a small group of stakeholders in 2000 and 2001, and invited me to attend, pointing out the need for a new stream group. Eventually I agreed to try organizing one. A number of Sligo residents were supportive; as memory serves we had 40 members within a month, and perhaps a hundred by year’s end. Friends of Sligo Creek became registered as a non-profit in 2002. 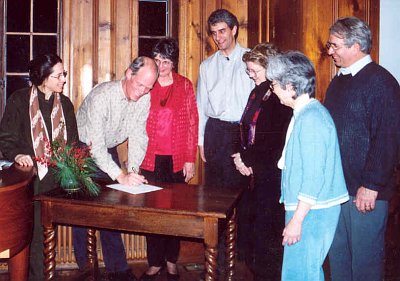 The founding Board of Directors signs Bylaws and Articles of Incorporation, January 2002.