Kit Gage takes a look at the performance of the Sligo Park Hills new stormwater facilities during the heavy rains of June 2015.

Sligo Park Hills is a hilly small neighborhood just upstream and West of Takoma Park, in Montgomery County. Starting about 5 years ago, the county’s Departments of Environmental Protection and Transportation started collaborating to plan, design, coordinate with the neighborhood and install almost a hundred separate stormwater facilities. These include bioswales that resemble rain gardens, pervious parking pads and trees in boxes that allow street water to flow in. All of these are in the Right of Way – which is from the street to variably about 10′ toward the house. A separate project involves RainScapes rewards projects on peoples’ yards.

Phase shift to many dump trucks and front end loaders, many meetings with a few or many neighbors and lots of emails, and several years later, and the right of way part of the Green Neighborhood is about done. So how are they working?

Last Saturday was an interesting test. We got a rainfall event that totaled about 2.5″ rain over about 26 hours. After the first 16 hours, we had accumulated .81″ of rain. I went out at about 3 pm to a two block section of the neighborhood on Park Valley Road. It’s a straight shot down from Piney Branch to Sligo Creek. I saw some projects absorbing all the rain, and others leaking some out, to be captured down the road. At the bottom of the road was the test: There are two outflow pipes, one on each side. No water was coming out, not a bit. All the rain had been and was being absorbed, as designed.

Then I went out at about 4:30 pm just after we’d gotten an additional 1.17″ rain in a half hour. All around the neighborhood there was standing water, pouring water, with water racing down the roads even where they were almost flat. Park Valley was a river. All the projects were full and fountains of water coming up at various points as the water smashed into concrete or metal. Water was going into and out of all the projects, so it was aimed correctly to capture what could be captured. There’s one big long project, probably 40′ or more in length down the hill with 13 check dams of concrete perpendicular to the long swale. Water was cascading down the entire length, flowing over at each segment of concrete or big rocks. It was being absorbed a bit, and slowed a bit all the way, just as designed. And water was flowing out of the bottom as designed. Nothing could capture and hold that amount of water on saturated soil in that short a time. But the facilities were each doing their job. Sligo Creek down below was roiling and brown, filled just above the flood bowl. Terrifying speed and power of water. The USGS measuring station just down a bit recorded about 1500 cubic feet per second when typical is under 5.

Just imagine if hundreds or thousands of people up and down Sligo creek each put in a cistern connected to a small garden or tree, or in other ways better captured the rain that fell on their houses, apartments and yards. Sligo wouldn’t flood and be damaged so readily even in these massive rain events. And in regular rain events, most of the rain would flow slowly into Sligo, oozing thru the soil to deliver clean water to the creek. Just imagine. We could and can do it. 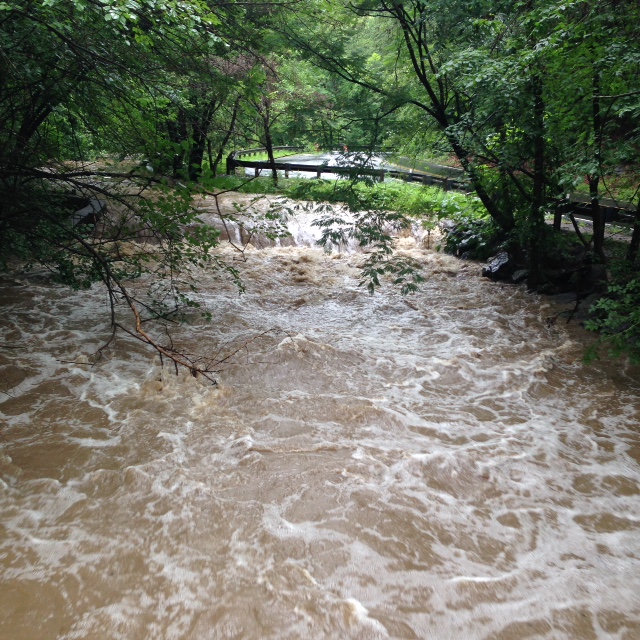 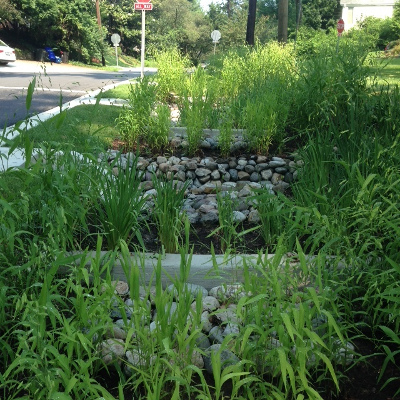