More than 200 fish and salamanders were found dead in the Flora Lane tributary on February 25, apparently the result of road-salt pollution from the Capital Beltway, which abuts the little stream.

Our FOSC water quality chair, Pat Ratkowski, was in the process of leading a team doing water testing in Sligo that evening when they noticed a couple dozen dead fish in the tributary. Exploring further up the stream, they noticed many more casualties among fish and salamanders. Their bodies showed no signs of scavenging by other animals, suggesting that the die-off had happened recently. 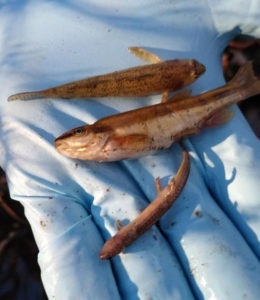 Pat took the photo, left, showing two fish and a salamander. He alerted the county’s Department of Environmental Protection (DEP) and three of their staff arrived at the scene the next morning. They counted 170 dead northern two-lined salamanders and 36 dead fish (26 blacknose dace, seven tessellated darters, two creek chub, and one white sucker).

Pat reported the kill he discovered through the Water WatchDog email. The DEP team of Steve Martin, Mark Rockman, and Alex Torrella responded ASAP, and found them all along the Flora Lane tributary, from its confluence with Sligo Creek upstream to a concrete structure that creates a small waterfall.

They did not find any dead fish or salamanders in the mainstem of Sligo.

Pat detected no noticable pollution in the water emerging from a large outfall at the end of Columbia Boulevard. At two other outfalls downstream, they found elevated levels of conductivity, a sign of excess salt. The first outfall drains mostly from the Beltway, with smaller amounts coming from the neighborhood, while the third pipe drains exclusively from the Beltway.

Since the only anomaly in these outfalls was high conductivity, they concluded that the fish and salamander kill was likely caused by a large influx of road salt from I-495 during a snow melt the previous two days.

A similar event in Gaithersburg was covered by WAMU-FM radio. There, dramatically elevated levels of chloride strongly suggested that salt was the cause. Read the full story or listen to the broadcast here.