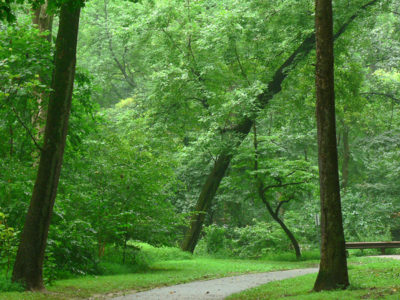 In 1927 a group of environmentally concerned citizens formed to protect all of the headwaters which were flowing into DC. The people in this group were the founding fathers of the Maryland-National Capital Parks and Planning Commission, which they established in 1927.

“Sligo Creek Park was formally developed as a result of the Capper-Crampton Act of 1930, which provided $1.5 million in federal funds to pay for parkland along tributaries of Rock Creek and the Anacostia River. Much of the land acquired for the park was donated by adjoining property owners such as E. Brooke Lee.” (from North Hills of Sligo Creek, Sally Gagné, pg. 167).

Most of this land was available 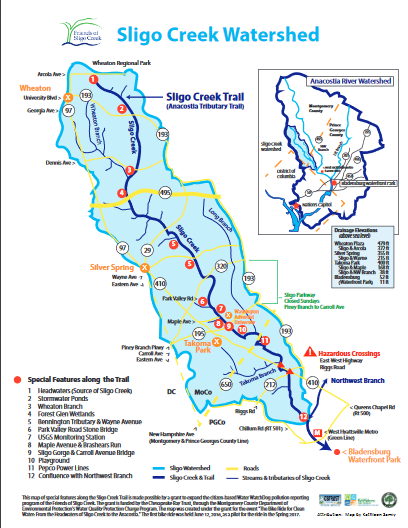 for the park because it was considered useless to developers at the time. The width of the park represents the flood plain of Sligo Creek. In the early ages of development most companies would not build on flood plains or steep slopes because it was not optimal land for buildings. Where there are large high rise buildings along the park there tend to be what are called military ridges, which are steep banks covered with trees. These allow for the park-goers to enjoy the natural beauty of undeveloped nature while also allowing the apartments to have a view of the park.

Sligo Creek Park is 543 acres, including the Sligo Creek Golf Course, and was added to over time through the purchase of private lands and public land acquisitions. The acreage of the park is determined by adding up the acres on the deeds to the land which make up each section of the park. However, since Friends of Sligo Creek works outside the stream valley slightly we actually do work on 613.9 acres of parkland.

M-NCPPC decided to split the park into units (and various local and neighborhood parks) along existing large roads that already separated areas of the park. For a long time these were kept written on 4 x 6 cards in Parks headquarters and later in the computer era stored in a database. The 6th unit, Unit 1a, was created when the county line between Prince George’s County and Montgomery County was moved, giving Montgomery County more park land. Prince George’s County made the entire Sligo Creek Stream Valley one unit, PG Unit 5, which consists of 78.6 acres. This acreage also includes two Community Recreation Centers, Parklawn and Green Meadows.

THE TAKOMA AND LONG BRANCH AREAS

Friends of Sligo Creek does also work in the Takoma Park and Long Branch areas, which are considered separate entities by M-NCPPC. The Long Branch Stream Valley is broken into two sections, upper and lower. The lower section is then split into two units. The upper section is considered a neighborhood park. There are also two other neighborhood parks and two local parks attributed to Long Branch. See LONG BRANCH PARKS.