Read about one of the least known, but most massive challenges, to urban waterway health in the United States today: salinized groundwater.

The holidays are fast approaching – that festive season of darkness, sleet and good cheer shared at thousands of parties that all seem to begin at 7 PM on the 2nd Saturday in December. Next time you’re at a one of these and need a can’t-miss ice breaker with the neighbor you’ve only waved to before, try this: “Did you know that right now, 23 feet beneath us, salt spread on Colesville Road in 1996 is seeping through soil pore spaces toward Sligo Creek?” If you’re allowed to remain at the party, you’ll know (1) you’re in good company and (2) what to say next: “There’s no pepper, of course.”

On your way home alone, you can take solace in the fact that you are on to one of the least known, but most massive challenges to urban waterway health in the United States today; salinized groundwater lenses. And what’s more, you tell yourself as you Jumar your way up your frosted front steps, you also know that the cause of this stealthy subterranean harm is the well-intentioned, but environmentally-destructive, practice of winter salting. Seventy years of trying to lower the melting point of water to make roads and sidewalks safer has, paradoxically, made surface waters far more dangerous for their inhabitants. And it’s not just a problem for those who live in streams.

“Salinization in groundwater and surface water is degrading habitat for aquatic organisms – and impacting large supplies of drinking water for humans throughout the region. Research indicates that if salinity were to continue to increase at its present rate, many surface waters in the northeastern United States would not be potable for human consumption (our emphasis added) and would become toxic to freshwater life within the next century.” This assessment comes from Lori Lilly, an environmental remediation consultant for state and county governments in the Mid-Atlantic region, who has a longstanding interest in the problem.

She went on to explain, “Much of the salt comes from road salt and deicers. Contaminates from road salt enter water resources by groundwater infiltration, runoff to surface water and through storm drains. The chloride remains in solution and is not subject to any significant natural removal methods; only dilution can reduce its concentration.” 2 Indeed, some scientists now believe that this legacy of annual road salting has altered – perhaps permanently – much of the nation’s groundwater, particularly in the urban areas of the Northeast and Midwest. But when and how did the United States start making its way down the Salt Road? 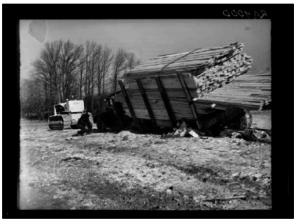 According to The Cary Institute of Ecosystem Studies (www.caryinstitute.org), salt was first used in the United States to de-ice roads in New Hampshire in 1938. The city of Detroit followed soon thereafter in 1940. By the winter of 1941-1942, a total of 5,000 tons of salt were spread on highways in the U.S. annually. Today, between 10 and 20 million tons of salt are used each year. This salt is often referred to as rock salt, to differentiate it from table salt, which is usually finely ground and includes various additives. Much of the rock salt used on American roads is mined from underground deposits in the Great Lakes region, Kansas and Louisiana. Many of these salt layers precipitated out from receding shallow seas millions of years ago, and are now making their way back into our streams, rivers and wells via DPW snow trucks. Salt application is generally ineffective below 15 degrees F, but salting typically works because these temperatures don’t appear until the later hours of the night if at all, a time when most commuters, diners and students have made it safely home. When applied to roads, parking lots and sidewalks in a timely way, salt typically lowers the temperature at which water (in the form of rain, sleet, etc.) freezes by 10 to 20 degrees F, preventing or at least substantially delaying ice formation.

But our ecosystems have paid a price for the increased safety. Seven decades of seasonal salt use has, in effect, saturated much of our ground water – and the surface waters connected to it – with excess chloride, pushing the water’s composition away from a true freshwater profile toward one edging closer to a brine solution, with broad, deleterious consequences. According to Lori Lilly, “Chloride in surface waters can be toxic to many forms of aquatic life. Aquatic species of concern include fish, macroinvertebrates, insects, and amphibians. Elevated chloride levels can threaten the health of food sources and pose a risk to species survival, growth, and/or reproduction. Chloride toxicity increases when it is associated with other cations, such as potassium or magnesium, 3 which may occur once the ions of road salt have dissolved and migrated at potentially different rates.”

Exposure to high levels of salinity for freshwater fish effects osmoregulation and breathing. Freshwater fishes have been shown to reduce food intake, as well as exhibit slower growth, when exposed to high levels of chlorides. As a group, amphibians tend to be more sensitive to salt compared with most other animals because they are poor osmoregulators. Pond-breeding species that place eggs on or near the bottom are at particular risk from road salt exposure, as their embryos will experience the highest salt concentrations and rates of mortality. And according to Lilly, threats to animal life don’t stop at the waters’ edges. 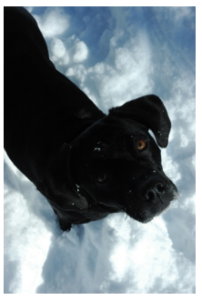 “Road salt is also a concern for pets because of potential road salt ingestion and paw health. Ingestion of road salt by eating salt directly, licking salty paws, and by drinking snow melt and runoff can have many negative effects on a pet’s health such as vomiting, diarrhea, seizure, and more.” Moreover, she points out, “Exposure of pet’s paws to road salt can produce painful irritations, inflammation, and cracking of the feet pads that can be prone to infection and are slow to heal.”

To be clear, road salt is not the only cause of the creeping salinization of the nation’s freshwaters. Other sources of salts include sewage, water conditioning salts, and lawn and farm fertilizers. Depending on the local geology, salts may also leach into ground and surface waters from naturally-occurring rock layers. And there is another less-than-obvious source: vehicle emissions, which contain sulfur and nitrogen compounds that can lead to salt formation in or nearby surface waters. But while all of these other sources contribute to the problem, the use of road salt is clearly the primary culprit.

So what can be done to stem the salt tide?

Unfortunately, Lori Lilly is not sanguine on most of our current options. “The rate of export, or flushing, of salt from ground and surface waters is usually slower than the rate of input. This is why it is so problematic. Groundwater and surface waters are now remaining salty even through spring and summer, when road salts and de-icers are not in use. During these seasons, salt concentrations are actually increased because the water’s base flow rate is decreased.” That is, even though counties and cities are not laying salt down from late spring through fall, our precipitation usually tapers off during these same seasons, so streams and rivers have less water volume, and thus any salts in them are more concentrated. 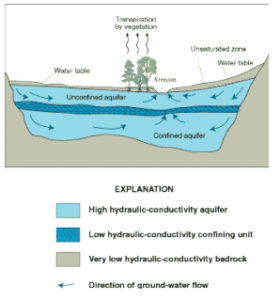 Nonetheless, the challenge has precipitated some innovative approaches to salt mitigation. For example, Lilly explained that, “Vegetation along roadways is a natural buffer area between pollutants and the waters. The University of New Hampshire suggests planting salt tolerant tree species such as horsechestnut, black locust, honey locust, red oak and white oak in areas of high salt concentrations.” By planting buffer strips of salt-adapted species between roads and waterways, we might intercept some of the salt before it reaches ground or surface waters, while simultaneously helping ensure that these living buffers have the best chance of long-term survival.

In addition, calibrating road salt application equipment is a best management practice (BMP). Ensuring that salt application is properly timed (it works best before the precip event begins), covering salt storage piles and sweeping up excess road salt are other BMPs that can make a large positive impact. If you would like to learn more about how our region is handling these issues, Maryland’s State Highway Administration plan is available at: http://roads.maryland.gov/oom/statewide_salt_management_plan.pdf. A critical factor to the success of this or any similar plan, however, is the adoption of its practices by both private contractors and landowners. State and county action alone is not enough. As summed up by the Minnesota Pollution Control Agency on its website, “It takes only one teaspoon of road salt to permanently pollute 5 gallons of water. Once 5 in the water, there is no way to remove the chloride, and at high concentrations, chloride can harm fish and plant life. Less is more when it comes to applying road salt.”

Until viable and economical alternatives are developed, efforts to reduce winter salt use – and the water contamination that comes with it – will be going up against decades of behavioral inertia. As David Strifling, Director of Marquette Law School’s Water Law and Policy Initiative writes, “The reason that I got interested in this is that there have been a lot of studies showing that this is a problem, especially in Northern cities, but there’s been very little progress in coming up with policies to actually do something about it…There’s a lot of talk about reducing salt usage, but, when the first storm hits, everybody wants it.” Stifling and his team are studying a variety of methods to decrease the use of salt on roads and walkways, including green infrastructure programs that slow the rate at which salts are absorbed into water, increased coordination among government agencies, legal limits, taxes on salt use and certificate programs for businesses that reduce their use of salt. There is currently no obvious solution to the problem, but long-simmering concerns in this area have finally crystallized into a greater urgency, attracting a new generation of researchers intent on addressing the stealthy, salty menace beneath our feet.