About 40 Sligo friends witnessed first-hand how a non-descript, large puddle can be home to a great variety of tiny animals when it’s a “vernal pool.” Ecologist Chris Sargent introduced us to a unique type of small water body that is both(a) isolated from streams and (b) stays wet only part of the year, a combination of features that protects its amphibian inhabitants — frog and salamander tadpoles — from predatory fish. Chris used the two vernal pools along Wheaton Branch (near Woodman) for this outing on March 4, 2006.

Following Chris’s introduction, everyone looked at her home-made bottle traps (made from a pair of two-liter plastic soda bottles), which she set out the night before. Inside, we saw a veritable flotilla of tiny reddish crustaceans (no bigger than pin-heads) called daphnia (also known as water fleas) that swim about under water in a jerky fashion using their antennae. They filter out food from the water, eating algae, zooplankton, and plant detritus, and are in turn eaten by water beetles and salamander larvae. 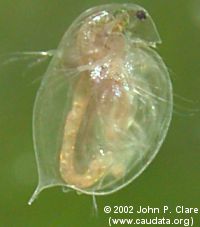 We saw lots of the tiny, reddish crustaceans called daphnia that Chris captured
in a home-made double-bottle trap she put out the night before.

Chris Sargent shows the equipment used to capture the daphnia.

We scooped short nets through the water and dropped the capture into shallow basins, enabling us to see a great range of tiny organisms. Most numerous were the seed shrimp, another miniature crustacean that looks like a sesame seed with black and white mottling. Especially remarkable miniature clams known as fingernail clams. These pale brown molluscs — about half the size of your pinkie fingernail — are efficient filter feeders, taking in large numbers of bacteria, along with algae and detritus.

With a simple net and some shallow basins, we found plenty of seed shrimp, isopods, copepods, fingernail clams, and leeches, plus one non-biting midge larva. 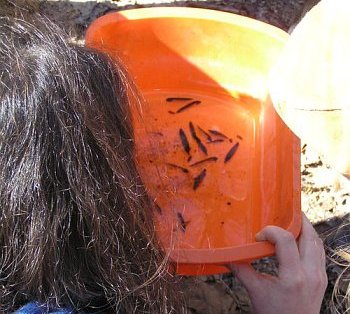 These great close-ups taken during the outing show some of what we collected. A is a leech, B are seed shrimp, and C is a fingernail clam.

By far the largest creatures in the water were the inch-long isopods, another kind of crustacean. Isopods help break down decaying leaves for the smaller organisms to eat. The last crustaceans we noticed were copepods, very small (under 0.2 in), tear-drop shaped, and colored grey and brown. They feed by filtering plankton from the water or grazing on bottom detritus.

Mike Smith studies some of the critters we found,
while Chris Sargent helps identify them
with her vernal pool books. 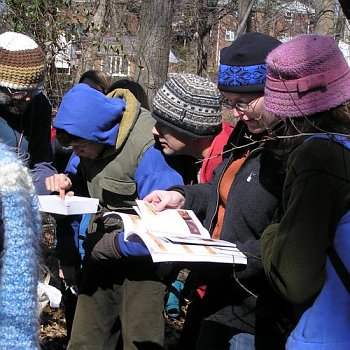 We observed only two predators: a few half-inch leeches, and one very thin, red, worm-like insect larva of the Chironomid midge. These midges prey on other tiny invertebrates and plankton and feed on plant detritus. They later hatch in large swarms of non-biting mosquito-like insects that are a rich food source for swallows and probably bats, and thus help cycle nutrients out of the pool into the rest of the forest ecosystem.

As it continues to warm up, many other species can likely be found in the pools. Things to look for are beetles (such as predaceous diving beetles, backswimmers, and water boatman), water stiders, mayflies, caddisflies, dragonflies, water mites, and snails. Very soon, wood frogs may breed in the pools, leaving round, jelly-covered egg masses.

Chris explained that some of the animals in vernal pools are so well adapted to their wet-and-dry cycles that they cannot survive without them. Such obligate (or indicator) species, as they’re known, include Sligo animals like wood frogs and spotted salamanders. Many other animals — called facultative species — use vernal pools as one of many habitat options. Such species in Sligo might include spring peepers, tree frogs, and American and Fowler’s toads. Other wildlife use vernal pools for water and food, including snakes, turtles, mammals, and birds.

For further information, Chris recommends An Introduction to Mid-Atlantic Seasonal Pools, published on line by the EPA ( also available in hard copy).