A group of fourteen adults and children explored the Sligo Creek waters just below University Boulevard looking for stream critters with leader Adam Griggs, an aquatic biologist with the Interstate Commission on the Potomac River Basin. Our site was at the first parking lot downstream from University Boulevard. We were joined by photographer Charles Shoemaker of the Gazette Newspapers, which ran a front page photo from the outing.

Adam immediately noticed the considerable amount of algae floating in the stream and said it was more appropriate for a barnyard pond than a stream. This level of algae in early spring indicated an excess of nitrogen, probably arriving directly from nitrogen pollution in the atmosphere through rainfall.

We used a miner’s sieve bucket to filter small critters from the water.

Adam told us about the “functional feeding groups” into which creek animals are classified: scrapers, shredders, collectors, filterers, etc. Each group plays an important role in moving the nutrients in plant debris, algae, plankton, and the like up the food chain to larger and larger animals. We found scuds, for example, small 10-legged crustaceans that collect particles of suspended plant matter or graze on the thin film of algae, fungi and bacteria that forms on leaves, stems, and rocks.

One sample from the bucket-sieve produced a young white sucker. This fish, common in Maryland, has a mouth located on the underside of its head that helps with bottom feeding. At this early phase, it grazes on plants. Adults feed on aquatic insect larvae, crustaceans, small clams, and detritus. 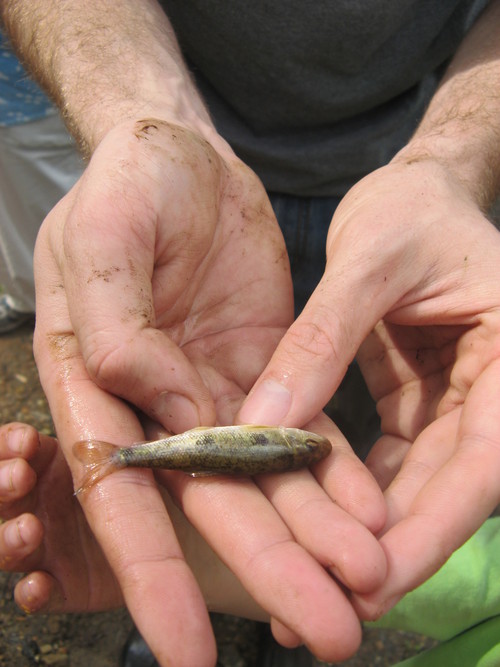 We also found a female black-nosed dace, pregnant with eggs
that a male will fertilize just after they are laid.

Adam pointed out that, since fish can escape from poor-quality water by swimming up or downstream, they are not as useful for measuring stream quality as aquatic insect larvae, which have much more limited mobility.

Just below the confluence with Bree Tributary, we found attached to a rock what some of us thought might be a case-maker caddisfly larva, which would have been good news since they are less pollution tolerant and thus indicative of better-quality water. Unfortunately, Adam identified it as the pupal stage of a netspinner caddisfly in its cuccoon, an insect that is highly tolerant of unhealthy water. It creates a silk web that filters nutrients from the passing water.

Everyone was excited to find several two-lined salamanders. One had recently emerged from its tadpole stage, evidenced by the feathery gills just below the head; the salamander used them in its purely aquatic, tadpole stage.

Examining rocks in the stream bed, we found a jelly-like blob
that Adam told us was an egg-mass for fresh-water snails.
Most freshwater snails feed by scraping, but some are collectors, filterers, or shredders.

The kids found several crayfish, including this one with a missing claw (perhaps from a fight).

Adam explained that crayfish can afford to lose claws since they grow back the next time the skin is shed! He reminded us that crayfish are aquatic crustaceans (related to lobsters), while the similar-seeming scorpions are land-dwelling arachnids, related to spiders. If aquatic vegetation is scarce, like in Sligo, crayfish will eat insects, scuds, live snails, and dead fish. They are a favorite food for night-herons, which breed in Sligo.