Smithsonian geologist Janet Douglas, a long-time Takoma Park resident, led 21 adults on a walk through the 500-million-year history of Sligo Creek’s geologic evolution, focusing on the area between Maple Avenue and the Flower Avenue playground.

We started at a wide, flat rock emerging from the lawn behind the bus stop at the corner of Maple and Sligo Creek Parkway. This rock’s grayish color and lumpy texture says a lot about its makeup and origins that we learned along the way.

Janet explained that the bedrock now visible in the Park shows evidence of metamorphic processes that require levels of pressure and heat (at least 700° F) only possible beneath mountains 7-10 miles high above the current surface. This is one reason why geologists describe our area as having once been dominated by Himalayan-sized mountains. Erosion over hundreds of millions of years has uncovered these rocks once so deeply buried.

The surfaces of many rocks in Sligo are obscured by moss, lichens, and chemical weathering. A freshly broken rock shows its true salt-and-pepper texture. Each bit of color is a crystal grain of muscovite (white or shiny mica), biotite (dark), or feldspar (white or pinkish), the basic constituent minerals of our Sligo rocks. Janet said that these types of minerals, and the size of the grains, indicate a medium grade sandstone that cooled slowly enough from the high pressure and temperature of metamorphism for visible crystals to grow, but not slowly enough for very large crystals to form.

Geologists believe this rock material originated as muddy sediments at the bottom of the ancient Iapetus Ocean about 450 million years ago. This ocean separated the proto-North American continent from an approaching volcanic island arch that eventually collided with our continent during the Taconian Orogeny between 460 and 440 million years ago.

Embedded within this salt-and-pepper background is a profusion of rock chunks of various sizes called clasts or olistoliths. Geologists infer these fell into the muddy ocean bottom during landslides off the volcanic island chain before the muddy sediments became rock. The lighter-colored objects (mostly schist and metamorphosed quartz-sandstone) are made of quartz and other resistant felsic minerals and may thus protrude from the surface of the rock. The less common darker objects are mostly amphibolite, a metamorphosed igneous rock made of less-resistant mafic minerals (high in magnesium and iron) and often recessed into the rock face

Occasionally, we were able to see the layering effects of metamorphosis. The striped pattern on this rock’s surface resulted from intense pressure on opposing sides (in this case, top and bottom) that caused its minerals to flatten out in layers as they crystalized. It probably reflects the most recent episode of metamorphism, thought to have occurred between 320 and 220 million years ago when the future-African continent slammed into North America during the most recent mountain-forming event, the Alleghanian Orogeny. (Africa later moved to its current position when the Atlantic Ocean opened up.)

A common feature of our rocks are their many quartz bodies, ranging from barely-visible finger-nail-sized pieces to large boulders. Janet explained that quartz has the lowest melting temperature of our common minerals, so it more readily becomes liquid during the building up of mountains. This liquid quartz creates small crystals within rocks and fills large crevices, hardening into veins. Although quartz is highly resistant to chemical breakdown (by acid or water, for example), it is quite brittle and breaks easily into smaller and smaller pieces, thus forming the pebbles and sands of Sligo’s stream beds (and our ocean beaches).

Janet showed us a dramatic vein of quartz within the creek bed, just upstream from the Carroll Ave bridge. It spans the wide, couch-shaped feature known as “Meditation Rock.” This large vein includes a major segment of pure muscovite.

One big boulder of quartz is located on the west slope of the creek valley, just downstream from the Carroll Ave bridge. 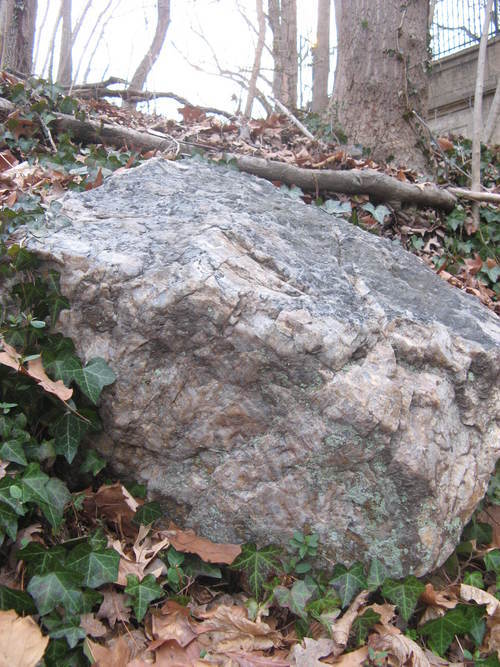 The on-going erosion of our rocks was also in evidence. Janet showed us a rock where layers have been peeling off. This very slow process, called exfoliation, results when rocks gradually expand after being buried under miles of heavy mountain material. The expansion, aided by freeze and thawing, causes layers to peel off.

We also looked at the phenomenon of parallel breaks (joints) in our rocks. These retain evidence of ancient pressures on the rocks, which tend to fissure along lines of weakness inherent in the rocks’ mineral structure. The angle of these joints is the same through a wide swath of the Maryland Piedmont, indicating that the entire area was subject to massive pressures from the same direction.

A non-native rock that is nevertheless prevalent in Sligo is the limestone imported as rip-rap to reinforce the stream banks. The clearly layered and wavy texture of the rock, along with the absence of visible grains, marks this as limestone, probably quarried near Baltimore where it occurs. The dramatic white banding is a vein of pure calcite. Elsewhere along the Creek, a rock called serpentinite has been brought in, probably from the quarry in Rockville.